Here are some Carmen Electra bikini pictures from her vacation in Greece, and well, at least her tits still look good. Of course, those things will probably look good until well into her 80s. Carmen’s face, on the other hand, seems not to have weathered the ravages of time that well. Or maybe we’ve just never seen her without makup before. Either way, it’s not looking good. In fact, it’s the complete opposite of good 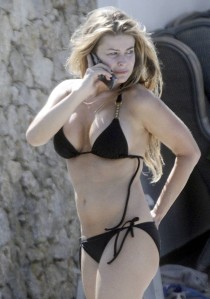 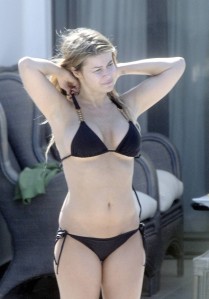 There’s nothing like murder to up your celebrity profile, and Megan Hauserman just jumped from the Q List to at least the D List thanks to the fact that there was a murderer on her now cancelled reality dating game show, Megan Wants a Millionaire. Truth be told, had everything gone as expected with her show, we wouldn’t even be posting these Megan Hauserman bikini pictures, and the Paparazzi probably wouldn’t even have taken them, but now that she’s famous for something other than just being a reality show bimbo (though not by much), she’ll be getting the attention she’s always been craving.

Also, check out her necklace: Is Megan Hauserman Jewish? I should ask her out. My parents would be so proud.

Mena Suvari Bikini Pictures are Best from Behind

Mena Suvari’s career has kid of gone down the crapper, but on the bright side, she still has a great ass! What? I’m just trying to be positive. I haven’t seen her anything lately, have you? That’s what I thought. Anyway, the point is, these Mena Suvari bikini pictures are hot, and that’s all that matters.

Egotastic! – The Sexy Side Of Celebrity Gossip – clik here…